Northampton is ‘Up for the Cup’ with ambitious recycling project

The University is joining forces with six other Northampton organisations who are on a mission to up the town’s green credentials as part of a new, national recycling campaign. The Northampton project is called Up for the Cup. It is tasked with collecting and recycling as many disposable cups as possible to reach a target of 160,000. It will run for the next 12 months as a joint project between the University and town partners, each hosting a number of specially selected recycling bins across their sites. More than 8 million disposable cups are used in Northampton each year with most not being recycled, the campaign also hopes to increase awareness about the need to recycle, with a view to the bins remaining after the project has officially finished.

The official partner organisations are:

Up for the Cup will be led by the University who have appointed Emma Stone as the project officer tasked with overseeing its delivery. Students from the University’s Marketing and Wastes Management degrees will also be brought on-board to promote and advise during Up for the Cup’s duration and research into the success of the project will be conducted throughout its duration. Up for the Cup is possible thanks to funding from the environmental campaigning and research charity Hubbub. They launched The Cup Fund earlier this year as a means to challenge towns and cities around the UK to come up with creative ways to boost disposable cup recycling.

Northampton is one of 12 towns and cities to successfully bid for funds from Hubbub. The town received £75,000 from Hubbub’s ‘The Cup Fund’ to launch and run the project.

Margaret Bates, Professor of Sustainable Wastes Management at the University of Northampton, said: “Britons enjoy around 95 million cups of coffee per day. With a substantial number sipped from takeaway cups in coffee houses up and down the land, the challenge is on to recycle as many as possible. “Up for the Cup brings together some of the town’s major employers – the University of Northampton, the Royal & Derngate Theatre, the Grosvenor Shopping Centre, local government offices, Northampton General Hospital and even the mainline railway station – to form a coalition tasked with tackling a pressing urban environmental issue.

“Our ambitious project is only possible thanks to the vision and support from Hubbub’s Cup Fund Grant funding. We are all looking forward to working closely with them to make sure our recycling total reaches the cup’s brim.”

Councillor Tim Allebone, Chairman of the Northamptonshire Waste Partnership added: “The Northamptonshire Waste Partnership is delighted to be involved in the Up for the Cup recycling project in Northampton.  An estimated 8.5 million disposal coffee cups are used in the town every year, the vast majority of which are not currently recycled.“Through this project we are aiming to recycle 160,000 cups – that’s enough coffee cups stacked end to end for 138 Northampton lift towers – and will be recycled into paper and plastic, ready to be used again to produce new cups.

“We look forward to working alongside our partners to provide bins and collection facilities for those who live, work and study in Northampton to easily recycle their disposable cups.” 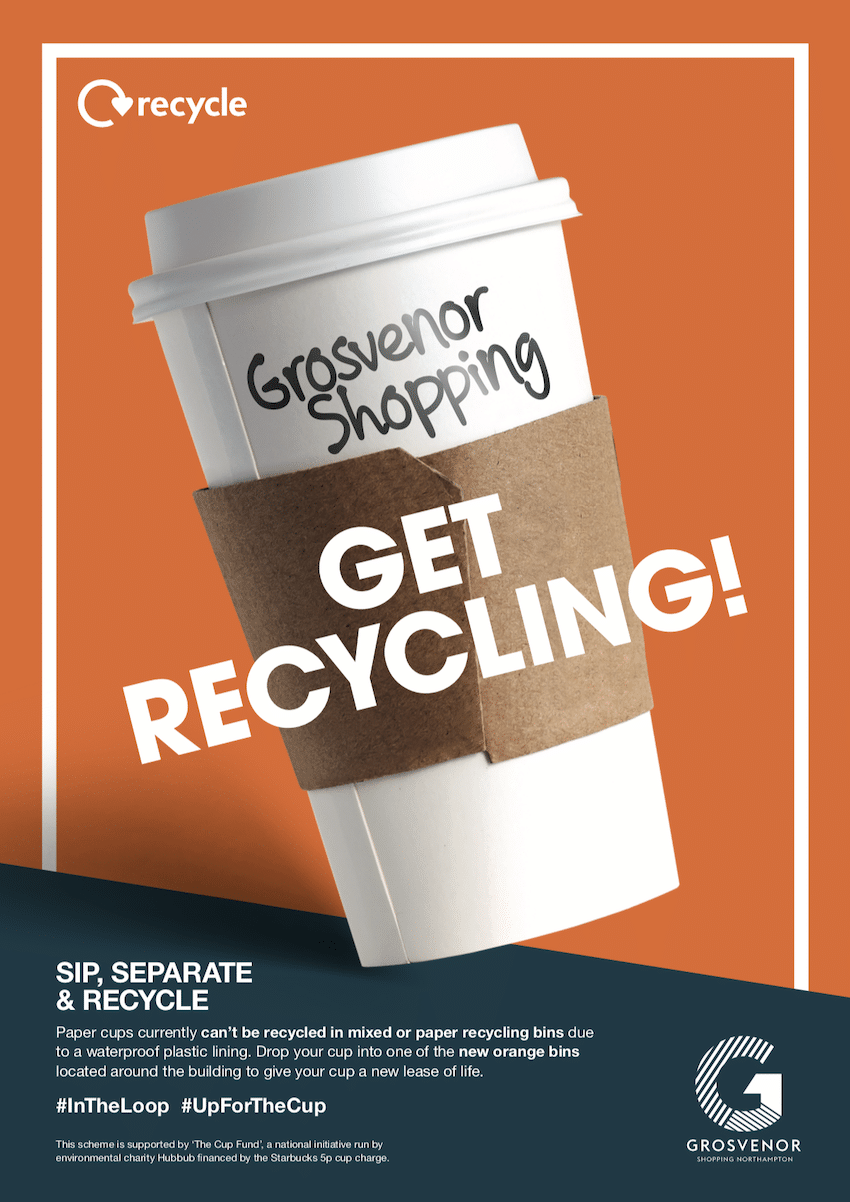